The architecture of the Maersk Tower is based on an idea of creating communities – between researchers, students and the city. The Maersk Tower – with its 3,300 copper shutters and relief-like expression, state-of-the-art research facilities and inviting campus park - serves to open the university towards the local area in a beautifully designed and varied green urban space. 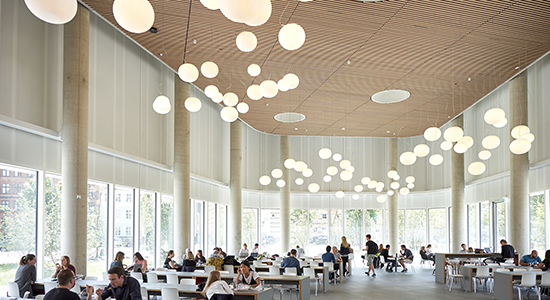 The Chicago Athenaeum: The International Architecture Award for 2018

The municipality of Copenhagen rewards the Maersk Tower

The society for the embellishment of the capital (Foreningen Hovedstadens Forskønnelse)

The Maersk Tower is the most energy-efficient laboratory building in the country and has been designed to withstand future climate changes. A large number of solutions targeting sustainability challenges have been integrated into the building’s design and construction. The building enables frontline research and is the place of study for the students of medicine and dentistry at the University of Copenhagen. The future challenges within medical sciences require a sustainable physical environment in order to support sustainable development.

Collection and reuse of rainwater

The main square facing Blegdamsvej has been designed to withstand future climate changes, including heavy showers. Below the square in front of the building facing Blegdamsvej five million litres of rain water can be collected. This means that rain water can remain on the site and will not strain the city’s sewerage system in the event of extreme downpours. Surplus rainwater can seep through the flagstones, where it is collected in a large reservoir and purified in a fascine. Surplus water from the park is reused, among other things, for watering the park. The roof gardens on the lower buildings are also designed to absorb heavy showers.

With the objective of creating as sustainable a building as possible, a range of energy-saving solutions have been implemented, and with the introduction of solar panels, the building even produces a small amount of energy. The substantial amount of equipment and electronics at Maersk Tower emit a lot of heat, which requires cooling. Along with the rest of Panum the building receives cold seawater from the Port of Copenhagen – like a climate-friendly district cooling system. District cooling represents a more environmentally friendly solution than traditional cooling using air conditioning, which requires a lot of electricity.

Work in the laboratories at Maersk Tower accounts for most of the building’s energy use. For this reason a great deal of effort has been put into optimizing the energy consumption in the laboratories. The energy use of laboratory equipment has been optimized, for instance, by installing a so-called “freezer-hotel”, which consists of specially designed rooms with water-cooling and energy-efficient freezers. Additionally, the hatches on the fume hoods are automatically closed when they are not in use. Maersk Tower is equipped with a so-called loop ventilation system, which combines ventilation pipes for all laboratories into one integrated system. Ventilation units are connected and disconnected according to the present need, which means that the system can run with close to optimal number of rotations per minute, which saves energy.

A building for bicycles

Cycling is central to transportation in the sustainable city and it presents many advantages. Bicycles do not pollute the air nor emit CO2, they are efficient and silent, and take up far less space in the city than cars do. Commuting by bike is also healthy and is thus very much in line with the research taking place at the faculty of Health and Medical Sciences. Because of this, Maersk Tower is equipped with optimal conditions for cyclists in order to promote biking as much as possible. The underground bicycle parking lot can accommodate 950 bicycles and gives access to locker rooms and showers, as well as free pumps to fill air into bike tires if needed. Close to the entrance between Maersk Tower and the Panum building, an urban landscape has been created where it is possible to park bicycles. Green bicycle paths have also been established, where locals and other visitors can cross the park, enjoy the green surroundings and appreciate the Maersk Tower up close.

Green quality of life – for users and citizens

The choice of trees and plants for the park has also taken possible future climate changes into account. They therefore include species from warmer climates like Asia and South America as well as species from our own, colder part of the world.

Natural grasses re-establish the areas historical affiliation to the grazing green and, together with a wide range of wood species, create a series of green outdoor rooms, which function as aromatic, varied common areas and ensure variation across the year. The varied plants represent various biotopes and ecosystems, creating great biodiversity and making the campus park a robust and ideal place for wildlife.

When was the Maersk Tower constructed?

How big is the Maersk Tower?

Read more about the Maersk Tower, the construction and collaborators

The Tower in the City

With its inviting, sustainable campus park and open square facing Blegdamsvej, the Maersk Tower is fully integrated with the surrounding neighbourhood. Like the rest of Panum the building is located at the centre of the Copenhagen Science City – one of the largest concentration of education and research institutions in Europe.

A campus park open to everyone

From Blegdamsvej you enter the Maersk Tower and the campus park via the front square with a sloping green area, benches and common areas. Here the university opens up towards the local area in a beautifully designed and varied, green urban space. The campus park is open to everyone and offers both outdoor study and common areas for staff and students and new, green outdoor experiences for the citizens of Nørrebro. The green areas and connections across the area invite neighbours and citizens to sit down or pass through – on foot or bicycle.

The Maersk Tower and the campus park are part of a plan for the local area. To avoid increasing the amount of traffic in the already heavily trafficked area, focus has been on strengthening bicycling and public transport. All outdoor parking spaces at Panum have been removed, and the basement car parking at Panum has been restructured to make room for more cars.

Copenhagen Science City is a network connecting legislature, academia and the business community in Copenhagen. It houses one of Europe’s largest concentrations of education and research in the fields of medicine, health sciences and natural sciences, including information- and communication technology.

Copenhagen Science City houses some 200 businesses based on science and health research. Many take advantage of the invitation to collaborate with the 30,000 students and academic employees at the University of Copenhagen (the SCIENCE and Health and Medical Sciences faculties), the University Hospital Rigshospitalet and the Metropolitan University College.

The road to entrepreneurship is short for researchers and students in Copenhagen Science City. They can walk straight from the best labs in the world to business incubators and innovation hubs, where they get professional support for testing and developing their business ideas.

Businesses are attracted by the opportunity to recruit the right people and to access the best science. The Greater Copenhagen Area has a documented investment potential within at least 12 different areas of high-quality research. Among these are diabetes, nanoscience and the quantum computers of the future.

In the area bordering Copenhagen Science City there is a high concentration of established businesses and available commercial tenancies, including office hotels: