Intensive care researcher awarded: ’I am impatient on behalf of critically ill patients’

Professor Anders Perner has spent his career improving the treatment and survival rates of patients in Danish intensive care units. Today, he receives the clinical KFJ Award for his great scientific achievements. 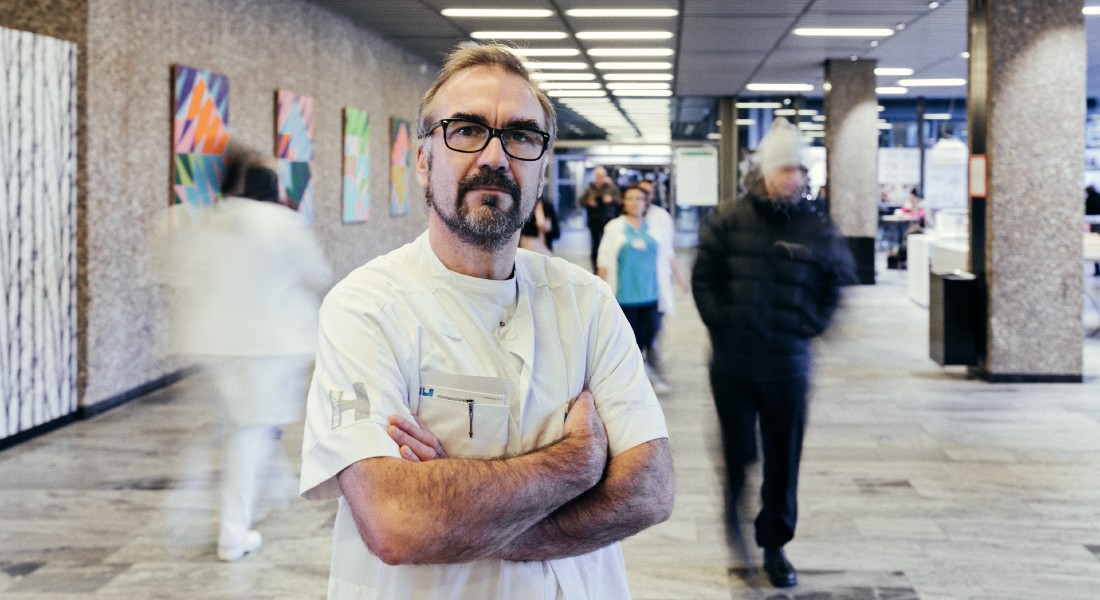 Once a year, the Kirsten and Freddy Johansen Foundation honours researchers who have made unique contributions to medical science. This year, the clinical award goes to Professor Anders Perner from the Department of Clinical Medicine and Rigshospitalet, while the pre-clinical award goes to Professor and group leader Ole Kiehn from the Department of Neuroscience. Both recipients receive DKK 1.5 million of which DKK 250,000 constitute a personal prize.

‘It is a great honour to receive this award, especially because it acknowledges the field of clinical research, which I have always been extremely interested in. Clinical research is one of the cornerstones of our healthcare system, and we should really pay more attention to it and do more of it’, says Anders Perner.

Anders Perner did not always think he would become a clinical researcher and medical doctor in an intensive care unit.

In fact, early in life he developed a great interest in figures and economics. But when he had to choose a field of study, medical science eventually trumped the financial world because of the meaningful aspect of working as a doctor as well as the opportunity to meet many different kinds of people.

Ole Kiehn’s research has, for the past 30 years, focussed on how the brain controls movement. He has developed and applied electrophysiological and new molecular biological techniques to shed light on the functional organisation and diversification of the neural circuits in mammals’ spinal cord and brainstem which control movement. He has mapped the complex circuits in the spinal cord that control various aspects of locomotion and the brain centres that communicate with the spinal motor circuits to mediate the start, stop, and directionality of the movement.

Anders Perner has spent the majority of his career treating the most critically ill patients. His results have led to changes to the international guidelines for fluid treatment, blood transfusion and the treatment of infections, and he has led the Danish part of the WHO clinical trials for hormonal treatment of critically ill COVID-19 patients. Beside his function as researcher and Chief Physician at Rigshospitalet, he is Vice Chairman of The Organization of Danish Medical Societies and Honorary Professor at the George Institute of Global Health, Sydney, Australia.

’I made the right choice in the end, and I was lucky enough to get a chance to do research while still a student. At the time, my plan was to become a neurosurgeon. But there were few openings, and while waiting for one I was encouraged to take a minor programme in anaesthesia, and that got me hooked’, he explains.

Impatient on behalf of the patients

After graduating, he found work at Sundby Hospital. As a young doctor he was given a lot of responsibility and came into contact with both anaesthesia, intensive care medicine and the emergency room.

’It was a very flat structure, and that meant you got to try lots of different things and to make an immediate difference to the patients. It was a real success experience and made me turn towards intensive care medicine instead of the narrower field of anaesthesia’, says Anders Perner.

His interest in research was piqued early on, and he initially focussed on blood poisoning and connections to the colon. This focus would later lead to one of his most celebrated and spectacular results. But after completing a PhD on the topic and supervising two PhD students working on the same topic he had to change track.

‘I was and continue to be extremely impatient on behalf of critically ill patients. We should constantly focus on ensuring that research helps improve treatments as fast as possible. And when we were unable to upscale our results and get the same effect and to implement them properly, we had to change track’, he explains.

‘The culture in the intensive care units in Sydney was very different from the ones back home, and they were probably more conservative in their treatment. This gave me important insight, and it made me realise that we were probably more proactive in our treatment in Denmark. Back home, the idea was that the more critically ill the patients were, the more treatment they got’, he says.

Clinical testing is the best tool we have to improve and optimise in the health sector. And it should be an even greater priority than it is. It may not be labelled as innovation, but to me, optimising the system by constantly improving treatments and ensuring that they are valuable to the patients is innovative work.

It was this line of thinking that led Anders Perner to some of the main research results of his career – both focussing on intensive care patients suffering from blood poisoning.

He demonstrated first that the liberal use of blood transfusions in Denmark did not benefit the patients. This has resulted in the use of less blood today. Furthermore, Danish hospitals used to treat patients with more advanced fluids than saltwater, so-called synthetic colloids.

‘I believe we used to choose this form of treatment for cultural and historical reasons – at any rate, it had never been properly tested clinically. And when we did a large-scale clinical study involving several intensive care units, we could tell that it did not work. What was worse, it actually hurt the patients. And of course, that is any doctor’s worst nightmare’, says Anders Perner.

’Last spring we talked a lot about COVID-19 vaccines, and one of the available vaccines was excluded from the vaccination programme because it was estimated that one in 100,000 would die from the side effects. For these critically ill patients, we found that one in 13 died from side effects of the treatment. When you are very sick and in an intensive care unit, side effects can have a huge impact on you. And it was a bit of an eye-opener to be confronted with these facts’, he explains.

After Anders Perner had published his results in some of the most prestigious scientific journals in the world, use of the advanced fluids was terminated. Unfortunately, not without difficulty.

’After we had published our results on the fluids, we got a lot of criticism. Both from the industry and from a small group of international colleagues who repeatedly criticised our results in severe terms at various conferences. Rigshospitalet even went to the press to defend me and criticise what they referred to as gangster methods. People would corner us at conferences and ask how we could sleep at night. Those kinds of things. It was extremely unpleasant. Especially because we had actually improved the treatment and survival rates’, says Anders Perner.

It is the same aspects of research that continue to drive Anders Perner. Clinical research and the validation of applied treatments are his alpha and omega.

’Clinical testing is the best tool we have to improve and optimise in the health sector. And it should be an even greater priority than it is. It may not be labelled as innovation, but to me, optimising the system by constantly improving treatments and ensuring that they are valuable to the patients is innovative work. It is also a way to make sure our tax money is well spent’, he says.

Anders Perner receives the clinical KFJ Award at a ceremony held in the Ceremonial Hall at the University of Copenhagen on Friday 8 October 2021.