Six weeks of physical exercise led to changes in the epigenetic information of skeletal muscle cells in young men. These changes took place in areas of the genome that have been linked to disease. Scientists at the University of Copenhagen say their research shows, for the first time, how exercise remodels DNA in skeletal muscle, so that new signals are established to keep the body healthy.

While it is widely known that regular physical exercise decreases the risk of virtually all chronic illnesses, the mechanisms at play are not fully known. Now scientists at the University of Copenhagen have discovered that the beneficial effects of physical exercise may in part result from changes to the structure of our DNA. These changes are referred as ‘epigenetic’.

DNA is the molecular instruction manual found in all our cells. Some sections of our DNA are genes, which are instructions for building proteins – the body’s building blocks – while other sections are called enhancers that regulate which genes are switched on or off, when, and in which tissue. The scientists found, for the first time, that exercise rewires the enhancers in regions of our DNA that are known to be associated with the risk to develop disease.

“Our findings provide a mechanism for the known beneficial effects of exercise. By connecting each enhancer with a gene, we further provide a list of direct targets that could mediate this effect,” says Professor Romain Barrès from the Novo Nordisk Foundation Center for Basic Metabolic Research, the senior author of the research, which was published in Molecular Metabolism. 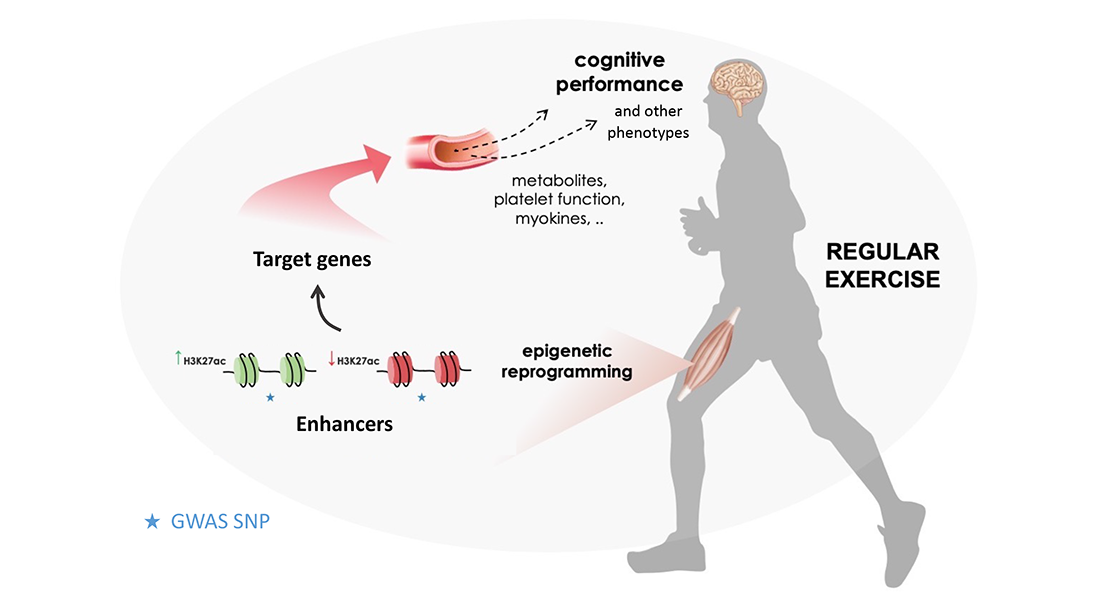 Exercise improves health of organs including the brain

The team of scientists hypothesized that endurance exercise training remodels the activity of gene enhancers in skeletal muscle. They recruited healthy young men and put them through a six-week endurance exercise program. The scientists collected a biopsy of their thigh muscle before and after the exercise intervention and examined if changes in the epigenetic signature of their DNA occurred after training.

The scientists discovered that after completing the endurance training program, the structure of many enhancers in the skeletal muscle of the young men had been altered. By connecting the enhancers to genetic databases, they discovered that many of the regulated enhancers have already been identified as hotspots of genetic variation between individuals – hotspots that have been associated with human disease.

The scientists found that exercise benefited organs that are distant from muscle, like the brain. They speculate that these benefits might result from signals released by muscles into the bloodstream. In particular, they found that exercise remodels enhancer activity in skeletal muscle that are linked to cognitive abilities, which opens for the identification of exercise training-induced secreted muscle factors targeting the brain.

“Our data provides evidence of a functional link between epigenetic rewiring of enhancers to control their activity after exercise training and the modulation of disease risk in humans,” says Assistant Professor Kristine Williams, the lead author of this study.