From a malaria Ph.D. to a possible cure for cancer 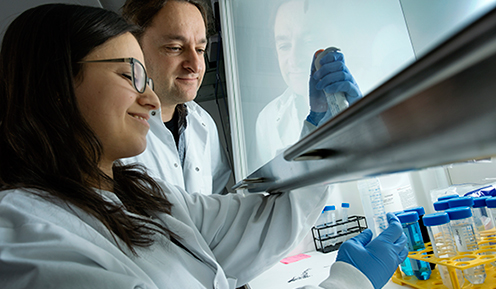 In 2003, Professor Ali Salanti was working on his Ph.D. with funding from the Danish Council for Independent Research. He was working on developing a malaria vaccine for pregnant women in Africa. At that time, he did not realize that he was actually standing on the threshold of a major breakthrough in both the treatment of malaria, and cancer.

When a malarial parasite has entered the human body, it gets into the red blood cells. However, it is always in constant danger of being destroyed by flowing through the spleen which will kill the parasite. Therefore, it needs to find somewhere it can attach itself.

It uses a protein hook as an anchor which it makes on the surface of the red blood cell it has entered. This hook enables the malarial parasite to latch on to a sugar structure which can be found in the placenta of pregnant women.

During his work on the malaria vaccine, Professor Salanti began to suspect that the sugar structure hook found in the placenta was the same as had been observed in cancer cells.

Salanti and his team decided to tie a toxin to the protein and test it on cancer-stricken mice, hoping that the protein would attach itself to the cancer cells and release the toxin inside.

Their assumption proved to be correct. The combination of the malarial protein and the toxic cell was effective in seeking out the cancer cells and destroying them. This has created fertile ground for developing a new and promising treatment for cancer.

Today, his research has attracted enormous international attention and led to several spin-off companies, such as VAR2 pharmaceuticals, which currently receives private funding from from various sources, e.g. the Innovation fund.

Salanti, however, was originally solely dependent on public research grants. "We have received funding from the Danish Council for Independent Research since right back in 2003. without the fundamental understanding we got back then, we would never have got this far", says Ali Salanti.

Ali Salanti’s team are currently developing both a malaria vaccine for pregnant women and preparing for cancer treatment trials.